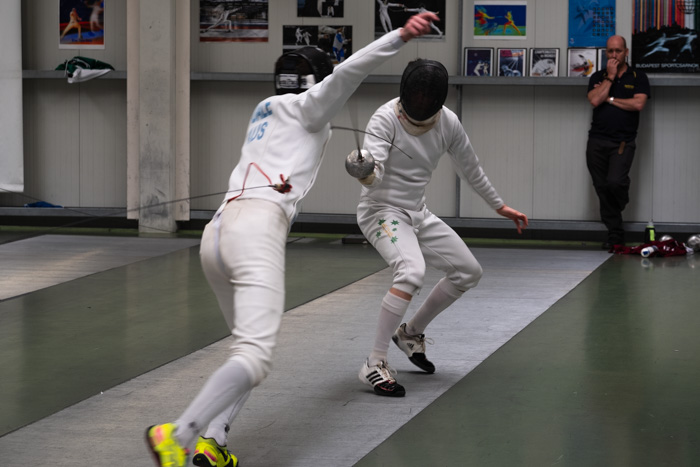 The following changes were introduced by the FIE at its 2018 congress and came into effect on 1 January 2019.

When, during a bout, there is one minute of fencing without a valid hit (or off-target hit in foil), fencers will no longer proceed to the next period. Instead yellow, red and black ‘P-cards’ will be awarded to the fencer with the lowest score, or to both fencers if the score is tied. This practice is referred to as ‘unwillingness to fight’.

The sequence of cards is:

If both fencers are awarded a black card when the scores are equal, the fencer with the higher FIE ranking wins the bout (Australian ranking in national tournaments).

The cards for non-combativity (‘P-Cards’) are separate from other penalty cards. For example, a fencer who receives a yellow card for covering target will not lose a point if they have already received a yellow P-Card. Also, a P-black card does not result in removal from the event or an ongoing suspension – just loss of the specific bout/match.

In team matches a fencer who receives a P-Card carries this card and subsequent cards across their team bouts. The yellow and red P-cards are given to the team but on the fourth offence the black P-card is only given to the fencer who received that final warning, so that fencer can be replaced with the reserve and the team doesn’t immediately lose.

For example, a fencer who receives a P-Card in their first bout and a P-Card in their second bout will be given a yellow P-Card followed by a red P-Card. If a fencer is shown a black P-Card they may be replaced by the reserve fencer, however if this is impossible due to the reserve already being used or unavailable then the offending team loses the match.

When explaining the rule changes the FIE emphasised its opposition to fencers retreating to the back end of the piste before a time period concludes.

“Fencers must fence during the whole time and not decide for themselves when they want to go to the break. It is the duty of the referee to apply the rules strictly. Referees should NOT accept that fencers stop before the end of the official time and should therefore apply sanctions whenever required.” – FIE FAQ

Should this occur the referee will stop the match and penalise the fencer(s) for ‘interrupting the bout without valid reason’, which is a yellow card offence. Note that this is not a P-Card offence so if a normal yellow card has already been received, this action will result in a red card.

>Read an explanation of the new rule by the FIE here