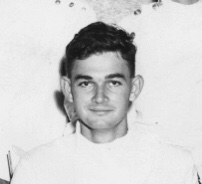 Prepared by the New South Wales Fencing Association and published here with permission.

The AFF/QFA sadly reports the passing of one of Australia’s legendary fencers from the mid-20th century. Laurie Smith died in Brisbane on 4 July at the age of 91.

A Queenslander, Laurie was Australian epee champion in 1952 and 1954. He was in the Australian team at the 1956 Melbourne Olympics and competed under the name Laurence Harding-Smith.

He also helped to advance the sport, serving two terms as President of the Australian Amateur Fencing Association during a time of renewal.

Veteran Graham Mills, himself twice Australian epee champion, remembers Laurie Smith as “one of the nicest blokes you could ever meet.”

“The ‘trinity’ as we called them at the time, saw the need to focus on greater participation on youth fencing and introduced the first national U18 championships. I was a beneficiary of their vision.”

Funeral arrangements will be posted when known.